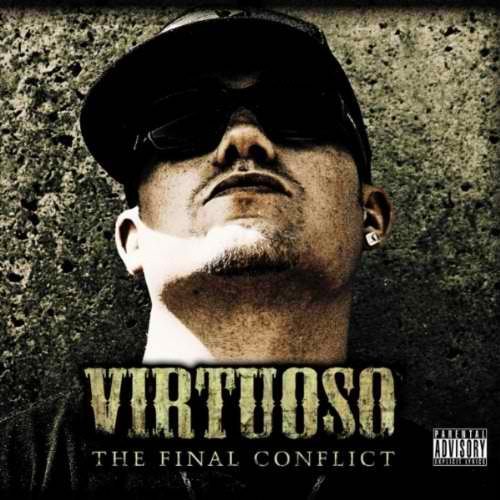 Lyrical legend Virtuoso is back bringing the fierce energy that has attracted fans since his formative teenage years as an international underground rap sensation. His latest effort "The Final Conflict" represents the highly anticipated completion of the "Word War" trilogy (along with "The Voice of Reason" and "Evolution of the Torturer"). Production is provided by Multi-Platinum Latin Grammy award winner Musicologo, underground favorites Blue Sky Black Death, Sicknature (of Snowgoons), Khrome, and Sandhill Productions. Features from Del Tha Funkee Homosapien, Akrobatik, Casual, and Torch combine with Virtuoso's trademark tounge terrorism perfectly, ensuring that "The Final Conflict" will be a hip-hop classic and a fitting finish to his highly acclaimed musical trilogy.

There's a deliberate mixing of pop culture references in the titling of this album. If on the one hand you abbreviate the underground rap pugilist Virtuoso to a singular "V," you might be reminded of a 1980's NBC mini-series called "V: The Final Battle" where aliens attempt to steal the world's resources. If on the other hand you're of a horror movie mindset, you may instead flash back to the 1981 film "Omen III: The Final Conflict." The trilogy depicted a child named Damien Thorn who was actually the Antichrist incarnate, at first unaware of his demonic heritage, later embracing his destiny and promulgating evil until his ultimate demise.

Either one is ultimately apt, because both reference dark days for humanity, and Virtuoso is proud to be one of rap's most gothic emcees. He seems to have found a like-minded soul in new production partner Blue Sky Black Death. They aren't co-credited on the cover or binding, but they produce two-thirds of "The Final Conflict" and give Virtuoso an appropriately menacing sound. GZA's once boastful line "I be the body dropper, the heartbeat stopper/Child educator plus head amputator" is given a newfound menace when sampled for the grim "Heartbeat Stopper," which appropriately also features a sample of Ryzarector cackling "HA, HA HA HA HA HA!" V's raps are penned with poison.

One might believe a rapper so brutal in his approach would be unlistenable and/or have few friends; then again one might forget that the equally savage Vinnie Paz has been an underground stalwart for years. Likewise the Boston native Virtuoso has stayed well connected through his long years in the indie rap scene, and he calls upon those friends to lend him a hand for "The Final Conflict." The guest appearances are both local and bi-coastal on "No Fear" as Akrobatik and Casual get it in on a heavy BSBD beat.

"The Bay of Pigs" reads like a who's who of independent hip-hop too, inviting Del the Funky Homosapien (billed as Deltron 3030) and Vast Aire to join him on on a track that still sounds haunting despite having a pleasantly sung hook and symphonic background instruments. The only collaborative song not produced by BSBD is the early leaked single "Wie Kings" featuring German rap star Torch, laced up by Sicknature with sick cello sounds one could mistake for Apocalyptica. Other production partners to join in the debauchery are Khrome, who can be heard lacing the apocalyptic Chuck D sampling "Catch Me on Two" and the appropriately titled and heavy-handed "Hypnotic," newcomer Sandhill on the stripped down and DJ scratch heavy "How to Make Fire" plus "In My Lives," and Musicologo on the album's grand finale "S.O.S. (The System Is Failing)."

Therein lies the secret to Virtuoso's success - he's not dark simply for the sake of the darkness. There's a definite method to what V would willingly describe as his madness, an underlying message to the seemingly unrepentant violence within his rhymes. When you read between the lines you find that Virtuoso is actually hopeful for a better world. If one compared Boston to Basin City, Virtuoso would be our Marv, always being manipulated by the system he's a part of yet, intelligent and powerful enough to exact revenge on the forces against him. He's the anti-hero who is not afraid to let the ends justify the means, the man who would kill a rapist rather than see him arrested and beat the charge at trial. While "The Final Conflict" may be deeper and darker than the casual rap fan is willing to go, Virtuoso's world is no less compelling for those willing to tread through the blood soaked pages of his rhyme book.

Pakistan is a smartphone exporter now

PUBLISHED 16 hours ago
Pakistan is a smartphone exporter now

TikTok leads as the most downloaded app in Pakistan: minister

PUBLISHED 19 hours ago
TikTok leads as the most downloaded app in Pakistan: minister
More News

Where are the top 4 Taliban supreme commanders?