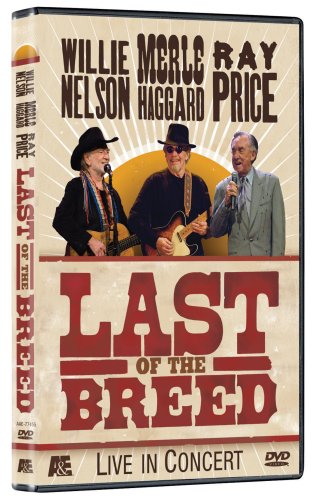 They are the Last of the Breed - the elder statesmen of classic country music who have inspired artists for generations. No one else sings country music with the passion and purity of Willie Nelson, Merle Haggard, and Ray Price, and in March 2007, these living legends and Country Music Hall of Famers united on-stage for a once-in-a-lifetime concert event. Now, the final, epic performance of their Last of the Breed tour has been captured in high definition and 5.1 digital surround sound to give fans the ultimate concert experience. Backed by the Grammy Award winning Ray Benson and Asleep At The Wheel and Ray Price s Cherokee Cowboys, THE LAST OF THE BREED: LIVE IN CONCERT delivers a feature-length master class in honky-tonk and Western swing.

WILLIE NELSON, MERLE HAGGARD, AND RAY PRICE
THE LAST OF THE BREED: LIVE IN CONCERT features live performances of 35 songs including: Always On My Mind, Crazy, For The Good Times, Make The World Go Away, Mama Tried, Night Life, Okie From Muskogee, On The Road Again, Pancho And Lefty, Ramblin Fever, Route 66, San Antonio Rose, Silver Wings, Sing Me Back Home, Take Me Back To Tulsa, That s The Way Love Goes, Whiskey River

Traditional Western swing and good ol' fashioned honky-tonk music just doesn't get any better than this. With a short run of 15 performances in 2007, the Last of the Breed tour united Willie Nelson, Merle Haggard, and Ray Price to celebrate their elder-statesmen status as Country Music Hall of Famers with over 150 years of shared experience between them. They truly are the last of their breed, and their history speaks for itself: Price gave Willie his first big career break in the late 1950s (he signed Nelson to tour with him--as a bass player!), and Nelson played a pivotal role with Haggard on some of country music's most beloved collaborations. Their continued vitality is on full display throughout this 35-song concert recorded at the Rosemont Theater in Rosemont, Illinois, on March 25, 2007. It's a mid-sized venue, and this was strictly a no-frills performance with a plain stage, a sold-out crowd, and the pure pleasure of masterful musicianship. At 81 years old, Price looks rheumy and tired at times (he was ailing toward the end of the tour), but his soothing voice remains smooth and steady through such time-honored hits as "For the Good Times" and "San Antonio Rose," with the Cherokee Cowboys providing flawless back-up in Grand Ol' Opry tradition.

Led by Ray Benson throughout the two-hour concert, Asleep at the Wheel performs a pair of golden oldies ("Route 66" and "Miles and Miles of Texas") before Merle Haggard comes on for an eight-song set, effortlessly demonstrating his skill with fiddle and Fender. By the time Willie Nelson strolls onstage to trade vocals with Haggard on "Okie from Muskogee," "Pancho and Lefty," and three other favorites, it's clear that Last of the Breed is truly something special. This isn't the best performance ever given by these men or these bands (including Mickey Raphael on harmonica and Theresa Lane Haggard on backup vocals), but it's darn sure good enough, with some blissful moments of perfection at regular intervals. Special guest Freddie Powers appears for a breezy rendition of "I'm Gonna Sit Right Down and Write Myself a Letter," and then Nelson, Haggard, and Price trade vocals on three songs (including Nelson's timeless classic "Crazy") before Willie takes over for a five-song set of his solo classics, including "On the Road Again," a pair of humorous new songs ("Superman" and "You Don't Think I'm Funny Anymore") and a show-closing performance of "Whiskey River" with everyone onstage. Despite a few rough edges, Last of the Breed is still a treasure to cherish, not simply for long-time devotees of country music but for anyone who wants to see and hear (in crisp, clean 5.1-channel digital surround sound) what real country music should sound like. DVD bonus features include Benson's delightful half-hour interview with Nelson, Haggard, and Price, and Nelson's personally guided tour of his lavishly appointed tour bus. For anyone who cares about the legacy of country music's greatest performers, Last of the Breed is nothing less than essential. --Jeff Shannon